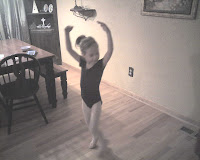 When I was pregnant with my first baby, I remember talking to my partner at work about names. I told her we'd probably name the baby Angelina if it was a girl, after Joe's grandmother. She said "like Angelina Ballerina." At that time, I had no idea who Angelina Ballerina was and thought she was just saying that because it sort of rhymed. Little did I know that the name Angelina Ballerina would become a major part of our lives, more than just the story of a little mouse.

Last Thursday night Angelina started her very first dance class. For at least a year, this is all she's been talking about. When she was a little younger, she was given several Angelina Ballerina items,including a movie. We often read her the first story written about Angelina Ballerina, in which Angelina the mouse doesn't want to do anything but dance all day. This story describes our Angelina very well! She also loves the Barbie movies featuring Barbie playing a character that usually dances, specifically Barbie in the Nutcracker and Barbie Swan Lake. She will watch these movies over and over, just so she can get up on her toes and flitter around the room just like Barbie does. She always talks about being a ballerina and dances and sings practically all day long.

So, after getting the information, we signed her up for dance class and as her first day drew near, she grew more and more excited. My hubby's mom bought her a pair of ballet shoes and over-nighted them to us on Wednesday. When I showed them to her, she lit up and her excited smile took over her entire little face as I handed them to her to try on. She immediately went up on her toes and twirled around like a true ballerina.

Thursday evening, as she got dressed for dance class, I couldn't help but wonder where my tiny baby went. After I helped her get on her leotard and tights and pulled her hair up out of her face, the reality that my little girl is growing up hit me once again like a ton of bricks. I was completely suffocated by emotion and could barely utter a proud 'yes' when she asked me if she looked like a big girl. I was taken back to a time when she was just a small baby in my arms, cooing at me, feeding at my breast, unaware of the fact that the entire world was hers for the taking.

And now she knows it is and she wants every piece she can have of it.

When Angelina got home from her first dance class, she was so excited. I watched with pride as she reenacted everything they did in class. And I sighed with content as I realized that this is just the beginning. But I'm looking forward to the day that I just might be able to end this story with the same words Angelina Ballerina's story ends with: "Angelina was so busy dancing..that she didn't need to dance at suppertime or bedtime or on the way to school any more. She went every day to her ballet lessons and worked very hard for many years....until at last she became the famous ballerina Mademoiselle Angelina, and people came from far and wide to enjoy her lovely dancing."

Does this mean that my little Rose is going to grow up, too?

Yes, Mary, I'm afraid it does. It's a sharp sadness in the hearts of mothers that will only grow to a dull ache with time...the same time that steals the innocence of our tiny babies and turns them into curious children and then beautiful adults. It's sort of a bitter sweetness that gives motherhood it's edge. :-)