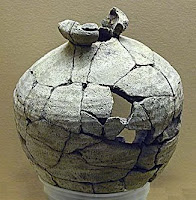 For almost 6 years I've been immersed in the most difficult assignment I think God has ever given me. And I have examined it from every angle, dissected it at times, analyzed it and experimented with it....And yes, maybe even ignored it a time or two. To say that I was adequately prepared for this assignment, or even remotely conscious of what it would entail, would be an overstatement. At least, at first glance. When I was first given the knowledge of my assignment, I was a different person. Sort of dull and scuffed and broken in some places, I resembled a piece of old pottery that had been buried beneath some dirt, weighed down and damaged by the shifting earth.

It took a lot to even want to be pieced back together, a mottled past blinding me through the cracks and crevices it created in my heart. But I was given an assignment and I knew I had to obey. In total recognition of everything that I was, everything that I am, and everything that I aspired to be, I was not too confident in my abilities to complete the assignment at all, much less in the way I knew I was expected to. But I had to try, didn't I? I knew somewhere deep down that I would be given what I needed to not only complete the task but complete it well.. But could I search for these virtues, knowing the road would be trying at times, feeling like I was far from the perfect person to do this job?

Philippians 4:13 says "I can do all things through Christ Who strengthens me." But back then, I did not know Christ, not really. I knew of Him and had a slight understanding of the Love He had for me, but did not know what that Love looked like in my own life at that time, as the sinful person I was, as the broken and scarred soul which I knew He saw. I did not know that He wasn't done with me yet, and while I may have not been exactly ready, may have had some cracks here and there, a blemish or two and a dull facade, He was the Master after all, and I was clay in His hands.

First, He took the broken pieces of my life and shined them up like new. Then He put a mirror in front of me so that I could just glimpse the smallest idea of what He really saw in me. Then He told me He was going to crush me. And I was not afraid. I had already been buried under the weight of my life, fragments scattered around, dirty and shattered and waiting to be pieced back together. But He had a much different plan than the one I had imagined. He did crush me. And it felt amazing. After that, the pieces of my life He thought were too big, He made smaller. The ones that were too small, He made bigger. He shaped and refashioned me, molding me into His image of me, and then shined me up even brighter than before.

And then He stuck me in front of a mirror again. "I am still not done with you yet," He whispered "I still have much work to do, but this is a start." As I looked myself over in the mirror, I felt His breath warming within me, new air in my lungs and a fire in my heart. And as I traced the line of stretching skin around my belly, which would grow bigger with each passing month, I knew I would also grow bigger as He filled me with everything I needed to complete this assignment.

I don't remember exactly what day that was, when I decided to parent the baby growing within my womb. All I know is that was the day that my life really began.
Posted by Rebecca at 12:54 PM