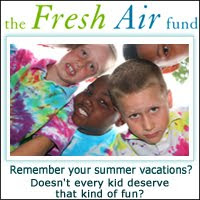 I love having some small part in sharing information about really good causes. So here is another quick post for The Fresh Air Fund for the next marathon:


On March 20th, there will be another half-marathon in NYC and the Fresh Air Fund-Racers team needs more runners to benefit this worthy cause. For those of you who don't know what the Fresh Air Fund is, it is a not-for-profit agency which provides summer experiences in the country for children from disadvantaged communities. Host families and camps in 13 states and Canada welcome these children every year to give them the benefit and enjoyment of country life. To learn more about this awesome cause, click here.

If you would like to be a runner in this March's race, click here for more info.

The Fresh Air Fund is also in need of more host families for this summer. A host family volunteers to open their home and family life to a child or children from the city, giving them a "fresh air experience they'll never forget." If you would like to host a child this summer, click here for info.
Posted by Rebecca at 10:08 AM No comments:

Thoughts From the Brink of Insanity 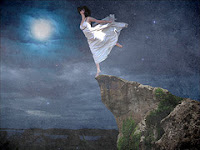 The only thing worse than insanity is a lifetime of standing on its brink. That's how I feel anyway. Because my entire life has felt sort of like this chaotic whirlwind of high emotions, low retreats and a fundamental sadness that has encompassed it all. I have sat on the brink of insanity and darkness within my mind for so long that I should probably invest in real estate here. The anticipation of finally jumping off feels akin to the sick nauseated feeling I got just before I jumped out of an airplane when I was 21. But it's different in that I have no idea what awaits me in the darkness below. So I stand here, teetering.

Becoming a mother of four small children has definitely held me firmly here on this brink at times and other times it has nudged me closer to tumbling over the edge. Motherhood so far has been a culmination of anxiety, fear, stress, worry, joy, love, happiness, sadness and peace. It is in essence a mirror image to my life before I became a mother, where my right hand raises when my left hand does but different because in that hand I hold the hearts of 4 children instead of a fist of air.

Through this waiting on the edge I have looked back a few times, wondering what will happen if I just step back one step, or maybe two. Can I even do that or are my feet stuck in place until it's time to jump, until I cross paths with that last event or emotion or person which unglues my toes enough to help me over the edge?

It seems like I have a choice but maybe I really don't. I wait for God to give me an answer but no matter how hard I pray, all I hear is silence. Insanity looks a little scary and yet standing here for so long, the view has become somewhat familiar and comforting, maybe even beautiful, like freedom. Perhaps it won't be so bad?

Or maybe I'm looking at this all wrong...

I recently read a true story about a man who lived his life in service to everyone around him. From befriending people who didn't have any friends to counseling pregnant teens and substance abusers and from donating most of his meager income to Catholic Relief Services to helping and caring for his sick and elderly neighbors, this man was thought of as a piece of Jesus on earth. He was devout in his faith and spent his life serving others through that faith. But this man struggled with anorexia and his life was eventually claimed by heart failure due to his illness.

So here is this man, deeply committed to living like Jesus, a devout Catholic with a personal relationship with Christ serving and living for everyone else as he struggled with his own personal problem. It was his cross which he bore without complaint. He took it upon his back and walked with his own father, counseling him as he discerned his vocation in life. He hid it in his heart as he helped countless people get clean from drugs and alcohol. He knelt each night on a prayer bench praying for every person who had been ignorant or rude to him, every person he met on the street or counseled in his various careers, every person he knew had no one else- all while struggling with his illness. It was his illness which helped to lead him deeper into his faith.

I wonder if he ever knelt on that prayer bench and asked God to heal him from his anorexia? To dissolve his mental process which led him to think he didn't need to eat. Or did he think that this was his cross to bear, something in life which would make him like Jesus even more-so than his servanthood and counsel? This was his brink of insanity and yet he didn't live his life as if he was standing there on that ledge looking down into a darkness he knew would swallow him if he jumped. He was living in a darkness in his own mind where he told himself lies enough to make him sick. He could jump but instead took his position there on that ledge and invested in not real estate but people.

As I sit here on my own brink of insanity, waxing and waning with the stages of life's moon, I'm reminded of an important fact: God does not promise that life will be easy but He does promise us His Love. Sometimes His love does not look like what we think it should, nor does it always come in tangible forms at the exact moment we need it to. But He does love us. And no matter how much darkness I see down below me and how far I feel pushed to that last millimeter of ledge, His Love remains sovereign, solid and the only source from which I will draw my strength to take up my own cross(es) and become more like Jesus.

And no matter how I feel standing on this brink of insanity, no matter what factors come into play each day to frazzle my feelings or take my emotions on another crazy ride, I have people to serve- four little people who test my patience, insult me at times, are addicted to whining and selfish destructive acts....These little people need me to be present, despite my position on this ledge, enough to invest in them and give them what they deserve to have- someone who loves them, serves them and brings them closer to God.


You can read the inspiring story of the man mentioned here.

*Photo by KatBPhotography
Posted by Rebecca at 11:39 AM 1 comment:

Labels: children, God, insanity, life, love, motherhood, servant, serving
Newer Posts Older Posts Home
Subscribe to: Posts (Atom)
"A woman's heart should be so hidden in Christ that a man must seek Him first to find her." ~Maya Angelou