A Big No Thank You To Being PC 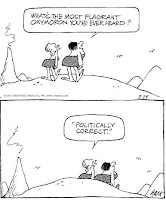 When did being "PC" become more important than morality?

I'm just wondering. Because last I checked, God hasn't changed at all even though the world has. Of course, we could all use a little brushing up on 'speaking the truth in love,' but I have to remain solid on my belief that just because you know that what someone else is doing is wrong, doesn't mean you are automatically judging them/being insensitive/arguing..etc..etc.. and that you have to keep your mouth shut. As a society we have fallen deeply into this HUGE lie which Satan has whispered into our hearts and minds called political correctness. Make no mistake; I'm not saying we should all go around bashing each other for what we do and say or how we act and live. I definitely don't agree with hostile protests and attacks supposed "Christians" partake in against their "heathen" peers, belittling or angrily scoffing at them . There is a very important verse about taking the plank out of our own eyes before trying to remove the splinter in someone else's, referenced several times in the Bible. It's valid and definitely worth a ton of consideration and prayer.

However, there is also another verse, in Ephesians (a), which states "Therefore, putting away falsehood, speak the truth, each one to his neighbor, for we are members one of another." This means that we are called to tell the truth to each other to keep the unity which God intends. Speaking that truth does not mean saying "to each his own." It does not mean saying "well the law says it's OK." And it certainly does not mean swallowing our words and turning a blind eye in the name of being politically correct. One of the things that is completely wrong with being so PC is that it focuses on the me in everything. It is a selfish outlook. More and more, people are forgetting that their actions don't just affect themselves. They affect the nation; society as a whole is hurt by the wicked actions of one man. Even if it's not directly, that little tear in one man's life can vein out and destroy so many others. A great example, which I hesitate to use only for the reason that this woman has since become a Christian and regrets her actions of early life, is the woman whose case Roe vs. Wade became the irrevocable turning point in history when our culture became a culture of death. (Icing on that cake, by the way, is that she never even had the abortion she fought so hard to gain the right to have.)

Another even more pertinent verse is written in the wise counsel of Proverbs (b). "He who says to the wicked man, 'You are just'-men will curse him, people will denounce him; But those who convict the evildoer will fare well, and on them will come the blessing of prosperity." God is telling us that if we hold accountable those who do wrong, those who go against the laws which He has set for us, we are in the right. We will be blessed by Him because we are speaking out in His name. This isn't passing judgment; that is God's place. If we do it right- speaking the truth in love- we are fulfilling that calling. God set His laws up so that we are unified in our actions and in our journey to Him. If there are ten Christian woman in a group and one is thinking of having an abortion (yes, there are "Christians" who actually believe it's OK!!!), the other nine are called to speak the truth in love and steer her away from that decision; NOT say "well it's none of my business and to each her own." Regardless of what each woman thinks, from the very day the one woman puts her decision to action, there will be a great divide among them. God's plan is not for us to be divided but to be united in Him, in Christ His son whom He sacrificed for us in order for us to be able to live with Him in paradise. To ignore this type of parasite or to take part in it yourself would be to basically spit in His face, spit on the cross to which Jesus was nailed and tell Him it's not good enough.

Abortion is just one of many things we are being forced to be politically correct about. Preachers can't even preach publicly anymore about the sinfulness of homosexuality without fear of being arrested or worse. Once again, this is NOT passing judgment for him to do this, it is reiterating the Word of God to His people, encouraging each other to not accept this ticket to hell-in-a-hand-basket which we all seem so eager to take in the name of political correctness. There are even some denominations which say it's OK to be homosexual. God loves every single one of His children the same; He does not hate any of them. He does, however, hate their actions which defy His laws and create a divide not only among His people but between Him and the offender. Think about it in terms of your own children. You can never actually hate your child for eating a piece of candy before dinner after you've explicitly told him not to. But you can hate his actions and you will punish him for them. This doesn't mean you love him any less and in fact, it means you do love him a lot- your discipline for his defying your rules is a measure of that love. It's the same thing which God does with any of the sins which cause us to be separated from Him. There are consequences to the actions we take that go against the laws He has set for us out of His own love for us. There are many more we are told to be PC about but those are just two I wanted to mention.

We also can't be too caught up in how others react to what we say. If we make sure our intent is love and we are acting out that love through our words, if the other person takes it the wrong way or gets defensive, that is on them not us. I have had this issue with a very important person in my life and everything is taken as judgment when that's not my intent. There are many factors which play a role in this person's automatic defensiveness but I have to believe that one of them is probably that in their heart, they know that I am speaking the truth. It's a natural reaction sometimes, especially if you are quite sensitive and conditioned to be defensive, to react in that way when you feel bad for your actions. It's a crazy cycle but one we have to break, for ourselves and each other. The natural defensiveness we often feel in these situations is because we know somewhere deep down that what the other person says is true and it makes us feel bad. People who have not given their soul to Satan, which I venture to say is most people, have a deep longing within to be good, to follow God's laws and love and serve Him, even if they're unaware of that longing. If we break His rules, we naturally feel bad but if it's brought to our attention, pride can often stand in our way of being able to recognize the truth, and instead we react defensively.

This push to be politically correct within our society feeds that pride. It feeds the arrogance which backs the "to each his own" argument. Being sensitive to- and respectful of- other people's beliefs is completely different than saying "your sinful actions are just." Whenever I hear those prideful declarations, I want to not only take the plank out of my own eye but beat that person with it until they understand! OK, not really, I'm just joking...but I think it's one of my biggest pet peeves. You know why? Because it sort of declares that that person is copping out. They don't want to go against the PC rule; they don't want to go against the crowd. They want to hide behind their fear of getting involved. They're kinda like Pontius Pilate in a way. He washed his hands of Jesus' destiny. He left it to the crowd - a crowd which all joined together and sneered at Jesus, screaming to crucify Him. He copped out because he didn't want to stand up for Him. But you know what? Jesus still asked His father to forgive these people. He loved them that much. Not only that but the search for divine Truth is not supposed to end when we are made to feel uncomfortable with what we currently believe. Political correctness stunts and stalls that search; it turns it around to the search for self, a search which only leads to spiritual death.

This life is not about being politically correct. It's about living for eternal life with our Father, storing up our treasures for Heaven. I'd rather live now going against the grain of political correctness, then be dead after this life because I refused to follow the rules which are set in love for us by our Heavenly Father. It's His love which we must proclaim with each other through our journey, a love that sets those rules for us to follow precisely so that we can reach the promised land which, if you think about it, is not politically correct at all.

Is it just me or does it seem that being "against" all this crazy stuff means you're closed minded and terrible. Yet yours is also an opinion! I will never understand this world we live in.

Yes, Shelly, that's what it means by the world's standards. Thankfully, we who believe in God's laws know what the right and wrong is and know what He says about those things. It's a fine line between being judgmental and speaking in love against things that are not right. But there is a line nonetheless and we must all strive to remain on the side of love, leaving God to judge. The problem with today's society is that it's all about "me" and NOTHING is anyone else's business. That is not how God created things to be. We're all supposed to be united, regardless of our religious affiliation, and journey together toward Truth. When you turn everything around to be about yourself, the Truth doesn't matter so much anymore and that is where we fail.

I always say to people that I am against the idea and KNOW that the idea is wrong. But I dont judge people solely based on that because there is so much more to a person.