What's at the heart of discontentment? Is it ungratefulness? Is it selfishness? Is it conceit or pride?

To be honest, I really have no clue. Right now I'm just a tired mama in the middle of the very slender neck of a bottle, squeezing my way through ever so slowly, being squished and disfigured as I try breathlessly to make it out of this particular spot.

I can't stand where I am right now but I'm not exactly sure why. Is it because I feel like I am suffocating? Or maybe it's because I can't move or do anything I want to do; the discomfort I feel gives birth to negative feelings for my surroundings and the season of life I am currently in. Whatever it is, it's making me tired and I feel the depression and anxiety creeping in again.

I'm just going to lay it all out right here because I don't really talk to anyone about it and it's begging to be let out. So here it is..

There is this old farmhouse about ten minutes from here. It sits on 12 1/2 gorgeous acres. It has a pool. It has an orchard and a pond. It has 4 bedrooms and lots more space. It has huge potential for not only our family life but our business as well. And it sits not only ten minutes from here but just out of my reach as it is over half a million dollars. OK, so that's waaay out of my reach. But, if this house were sitting quietly in the picturesque country hills outside of my hometown, it would be well over a million dollars. Little comfort, ya know?

So there is that house and here I am, in my cute little home that is 3 bedrooms and little room for a family of - currently - 6 people. It sits on 3/4 of an acre on a semi-busy road just off Route 15. Everywhere I go in my house, I can hear all the noise from the rumbling and stomping, screeching and squealing of my 4 boisterous children. Every. Where. I. Go. My bedroom is three steps in either direction from the kids' rooms and has a three inch gap at the bottom of the door. Three inches of space at the bottom of our bedroom door. Three steps away from little ears. You see where I'm going with this?

Don't get me wrong, I love my home... at least I did. Right now I have a small affection for it like a starving person might have an affection for moldy bread from a dumpster. I need this house. I am grateful we have it. I know there are many much larger families who have lived in less. I know this. I try to remind myself of it, even through the loud laughter and fighting that goes on in the middle of the day which incidentally almost always wakes up my two year old an hour and half before she should be woken up from nap. This house was an amazing blessing for us when we moved. We had two children and it seemed like a lot of space. But now we have four and a business and a dog. And I am tired.

I know God has a plan for us. Sometimes I have nightmares that it's going to include this house and rocking chairs and gray hair growing out of my head. Sometimes. But I'm pretty sure most of our desires for our family and business life are part of His plan, so I know that those nightmares won't come true. I guess it's just the waiting. I am working on the being content thing. I'm working feverishly, believe me. I just go in these spurts and I feel like it's probably just the devil messing with me. I mean, isn't that what he's really good at...one of the things, anyway? He magnifies our desires so they take over our life and shut out everything else that is important. My desires of a bigger home and the growth of our business and possibly our family are probably just as bad as any desire he likes to toy with people's minds over. Right? At least they are when they take over my days the way they have been, rendering me useless and completely unable to do anything but the bare minimum.

This past week has been really bad and I have been feeling like a trip to confession on Saturday is probably a good idea. Pray for me, that I can allow God's grace to dissolve my feelings of discontent, be even more thankful for His gifts and blessings, place my trust in Him, and wait patiently on the Lord for His plans to come to fruition.

"Give thanks in all circumstances; for this is the will of God in Christ Jesus for you." ~1 Thessalonians 5:18
Posted by Rebecca at 7:48 PM No comments: 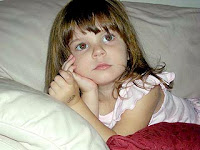 .......the current events... i.e. Casey Anthony and the murder of her daughter Caylee....I just had to say something.

There's a lot going around cyber world and in the "public square" about how Casey Anthony is guilty and she must pay. We have to have justice for Caylee, right?

We don't have to have anything.

Believe me, as a mother of 4 small children, I'm just as angry that a little girl's life was snuffed out probably by her mentally ill mother. I'm angry that if Casey is guilty, the jurors couldn't figure that out; that they didn't feel they had enough evidence. I even start down that road of cynicism toward God and want to ask Him why? But it doesn't matter why and I will never get the answer I think I want anyway. I'll get the truth, something I already know. Because He is God and the small smudge we live in is just a tiny part of a much bigger picture which He is painting of His world.

I'm more upset over the fact that the anger of a lot of people is being spewed outward into society over this case and is causing the anxious stirring that it has. It's like a virus, passing along from one person to the next, breeding even more anger and hatred for this woman and for the judicial system, which we all already know has its flaws. Some of us know this better than others, sadly.

But you see, it's not up to me - or you - to take our feelings and go out with guns blazing and shouting like mad people into the world, across Facebook and blogs and- if you're lucky enough to get your 15 minutes of fame- on T.V.

Because this world means absolutely nothing compared to our eternal home. We are here for a far greater purpose than to sit and stir our pots of anger, hatred, misfortune, jealousy, etc. We are here to serve. In my experience, the best possible way to serve is to pray for other people. People like Casey Anthony. I know it's hard not to act on our angry impulses in the way we naturally feel led to. I have failed miserably at keeping mine in check at times in my life. But the more I seek to serve others, which ultimately means serving God, the easier it is for me to work on that aspect of my human nature, to allow the Holy Spirit to consume me and calm the emotional charge I feel inside whenever I hear anything that makes my heart ache. And then I can turn it into a positive action.

What does talking about it in this hateful manner do anyway? Does it bring Caylee back? Does it give Casey a different sentence? The answer to both of those questions is NO! All it does is breed contempt, hatred, violence - all the things that drive someone to do something so despicable anyway. The ones who act this way only serve their own purpose - self satisfaction - and the end result is a furthering of the downward spiral we are in as a society.

We have to move on from this. We have to let go of our feelings and just give them to God. We have to have faith that God sees the entire picture He has painted and that it fulfills a greater purpose. Life is not ours; it belongs to Him. I am convicted of this every time I look into the innocent blue eyes of my oldest child, a life which was created to fulfill His plans at a time when I could only see mine. It was for His purposes. Not mine. Not my husband's. His. Same with my other three- little lives entrusted to us by their Creator; lives which ultimately don't belong to us at all. He could take them all tomorrow and there's nothing I can do about it. And I just have to trust in Him that it was part of His bigger plan which is made out of love.

How hard is it to look at what we deem a monster and say I love you? Very hard, no doubt. Very hard but possible. God calls us to love. He calls us to hate sin but He does not call us to hate the sinner. Very hard as well. Love Casey Anthony. Pray for her soul. She will get whatever sentence the Ultimate Judge sees fit to give her, and little Caylee might not have justice in this world but it doesn't really matter now that she lives in eternal happiness in the next. She's not looking down on her mother wondering why. She knows why because she's happily bouncing on her Father's knee as He shares all of the secrets of the world with her, including why she died. She is probably in heaven praying for her mother's soul, just like we should be here on earth.

I pray for everyone, including myself, who have felt bitter anger over this situation, and any other situation in their lives. I pray that the peace of the Holy Spirit will settle in our hearts and help us to turn our negative feelings into positive action, to change our own lives and that of at least one other person.