Yes, God Even Cares About Our Trash! 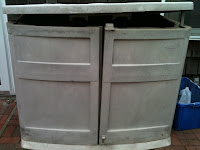 Okay, so as much as I would LOVE to make this post about recycling, caring for the earth, being less wasteful, etc...which are all things on my mind A LOT, it is about something almost completely unrelated to those subjects.

I was just thinking today about the small things that God sometimes uses to say "see, I'm here, I care about even this." I was reminded about a little blessing that came this past week in the form of...well, a trash can storage bin...or whatever they are called. Yes, I'm talking about trash - and those large wooden or plastic bins with doors that people hide their trash cans in. Are they kind of unsightly? Maybe a little. We got ours from someone who thought it didn't go with their new landscape. But we were excited to receive it, as it really was a small blessing.

In our neighborhood, which I guess is considered somewhere between rural and suburban, we have a lot of random animals roaming around, which often get into our trash. LOTS of homeless cats, a few foxes and deer from neighboring fields, and the occasional squirrel feeling extra saucy. We have woken up on many a morning to find a cornucopia of rotting veggies and meat, and other items - food and nonfood alike - trailing across our back patio area where we keep the trash until trash day. Of course, the culprit is almost always long gone, carrying with them whatever prize they dug out of our very accessible trash cans, probably laughing (do animals have a sense of humor?) at the mess they left in their wake.

So for the past few years (yes years!), we've put it on the "to do" list to find a remedy for this situation as we were both tired of cleaning up the garbage strewn about our yard. Okay, hubby was tired; I vehemently refused to do it!

We even went to Home Depot to price those plastic trash corrals - or whatever they're called - and were appalled at the amount H.D. was charging for a plastic bin that probably cost someone in China about $5 to make. HUNDREDS of dollars these things were. Really. Appalled. We left H.D. wondering how in the heck anyone could even spend that much on something like that. I mean really. It's trash. We have a big family. There's no way we can shell out a couple hundred bucks to buy one of those things.

Lowes was much the same, by the way.

So lately, the stench has been more of a problem than pesky critters searching for a midnight snack, and I have been curious as to what to do with this little issue of ours. Not only that, but the area where we keep the trash is really the most convenient and practical place to have it, yet it also is in the area of our backyard where we keep the grill. Who wants to smell smoldering trash on a hot summer day while trying to enjoy some toasty hot dogs at a bar-b-q? Not me. And probably not our guests. We'd move the grill except that it too is in the most convenient and practical area of the backyard, as it's tucked neatly into a spot we created out of the existing counter area that the previous owners had built. I think about it, and it used to be a very stressful thing....but it hasn't been like at the forefront of my mind too much lately. I mean, who thinks about their trash that much?

Enter Joe. And our business....both of which have been changing and growing so much lately. (That's not really pertinent to my trash tale but I thought I'd throw that in there...love you honey!) He had a really big install with a residential client this week and the client really liked what he did with his pool area. He liked it so much, that this trash hideaway thingy - or whatever it's called - seemed so much like an eyesore against the backdrop of his newly - and beautifully, I might add - landscaped yard, that he asked Joe if he wanted to take it. What? A trash thingy in really good condition; one that would normally cost several hundred dollars, for FREE?? Of course! Yes, we'd LOVE to take it!

So as I'm watching Joe and his brother haul this thing into the backyard from the truck, I'm just smiling to myself...although at first, I was a little unnerved by the disgusting condition it was in...no wonder the guy thought it didn't "go" with his yard... But then I said to myself, "it's for TRASH Rebecca, who cares that it's dirty?!" So I was smiling. But it didn't hit me til a few hours later that we just got a blessing delivered to us.

God says that He cares even about the hairs on our head. I never really thought that same care would extend to our trash but apparently it does. And maybe it's not so much about trash than it is about the trash bin thingy being a vehicle to deliver His love to us; a small reminder that He is still here and He does care about us. It's that simple.
Posted by Rebecca at 4:31 PM

"It's that simple." I SO love your endings. Fantastic.