E is for Expecting the Unexpected

Last night I worked at the pregnancy center I've been volunteering at for almost a year. I have to say I've sort of had my guard down these past few weeks because the client list has consisted of several STD-tests and it seemed like I was always the one who got to take them. So I've become a pro at that. It wasn't just any STD-test clients, it was usually teen-aged boys. Very interesting experience, let me tell you! I never thought I'd be in a position of talking to teen-aged boys about sex or STD's and especially not about the risks and gruesome information, complete with a flip chart of pictures showing signs and symptoms of certain STD's in VIVID COLORFUL detail. I know I'm doing something not a lot of people would ever consider doing. I know I'm making a difference, however small it might be. But it was getting monotonous a little bit and while I spent as much time with each client as they wanted me to and answered as many questions as they could think of (even the immature and silly ones), I breezed through these appointments pretty easily. Does it bother me how rampant STD's are these days, how completely ignorant not just teens are but adults too of how irresponsible they are being, how sad it is when you have to help someone figure out if their partner is cheating on them and if that's how they got the STD? Of course! It's a total reminder of the breakdown of society, of how far removed we are as a whole from the plan and design for sex and our relationships with one another, which God created.

However, as I was saying, these appointments are relatively easy and don't make me lose sleep at night. The ones that do are like the one I had last evening. It was a pregnancy test. Nothing in the book noted that the client might be abortion-minded. Usually, there is a note if this is the case so we can give them the information they need to make an informed decision, something most Planned Parenthood's and other abortion facilities do not do for their clients. I did not expect the client to tell me she had already had a few previous abortions. I did not expect her to tell me she didn't know what she was going to do with this new baby, if in fact she was pregnant. I should have but I didn't. I wasn't expecting this unexpected situation. At all.

I was completely caught off guard by her cool mannerism and her complete lack of emotion when it came to her prior abortions. My heart broke. I tried to pray to God to help me say the right thing. To be compassionate and understanding of her situation. To be gentle and kind and loving. But I feel like maybe I was just saying all the wrong things when I did speak. God did give me grace and I was compassionate and gentle and loving. But I didn't say much of what I'm trained to say. I didn't go through very many of the psychological, emotional or physical risks associated with abortion, especially with multiple ones. We did talk about some of that stuff but she didn't act like our visit helped her in any way. She didn't seem put off nor agreeable to anythin 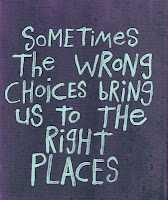 g that was relayed to her. She just seemed numb.

A half an hour of intake, chatting and 3 cups of water later, she took the pregnancy test. It was negative. Praise God! (I don't think you will EVER hear me say that about a negative result unless it's the one of a person who is abortion-minded.) Her quick, muffled sigh of relief told me that her emotions are in there somewhere. It was a small relief for me to see her relief. And it's not because I think she should be a certain way and that she needs to feel badly for what she's done. I don't feel that way. It's because despite the heinous nature of her past actions, despite her deliberate attempts to be numb to life, specifically this aspect of it, she is still human. She still has some feelings in there somewhere. She still understands that there is something inherently wrong with what she has done, even if she doesn't quite grasp it more than a pinch. Some day, some how, she will come to terms with that reality. And it will be then that she is able to receive and embrace the gift of the perfect love and forgiveness of God. And that's something she definitely won't expect.
Posted by Rebecca at 12:45 PM

Very moving post! You asked God for guidance as you spoke; sometimes I think that even if we feel we didn't say what we "should" have, we say the "right" thing, with His help of course.

God bless you for working in a very difficult place--one where you're making a difference!

You sound like the perfect person to be working at a Pregnancy Care Center. Such wisdom and humility. Blessings!