I is for In-laws 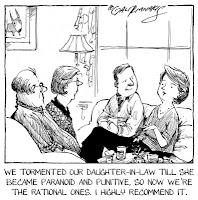 Disclaimer: The above cartoon is not an accurate portrayal of how my in-laws are (I don't think?! hehe) but it's still funny!

I completely believe that God places us in the lives of other people, and them in our lives, to fulfill His purposes. Sometimes we make mistakes and sometimes we get hurt or hurt others. But God always brings about good through any circumstance, if only we'd turn to Him. There has been so much that I have learned and experienced having the specific set of in-laws that I have. They have added their own essence to who I have become at age 30. I am so thankful for every step I've taken with them, even if some of those steps have been hard. I am so overjoyed that we are at a place of understanding and respect with each other and that we can move forward with love and peace. And I hope they feel the same. But it hasn't always been this way.

I always thought when I got married, I not only wanted to be the perfect daughter-in-law but I wanted to have a close relationship with my new family, especially my mother-in-law . I mean, what girl doesn't want that? I know it's not a super common thing but just seeing how my mom interacted with the people who married into our family, as well as knowing other families and the dynamics of their in-law relationships, I was pretty set on the idea. When I got married, I was blessed with two mothers-in-law as my husband's parents aren't together and his dad remarried long ago. This has come with a ton of challenges and a ton of blessings. And I also received a sister- and brother-in-law as well.

I have to admit that finding my place in a new family- one that is unique and has its own dynamics, characteristics and traditions- has been quite a feat. I have not been the perfect daughter-in-law at times. Or the perfect sister-in-law for that matter. There have been times when things seemed so drastically at the polar opposite end of what I always dreamed they'd be that I wasn't sure they'd ever make it back. A lot of it was just a difference of opinion. Some of it was over-stepping bounds with opinions on the life-choices my husband and I made for our family. Many times, it was just misunderstanding of things said or done. One thing that used to bug me was that despite my attempts, time was never really spent getting to know me and who I am at the heart.

There was a period of 6 months after our son was born that my husband's mom wasn't talking to us. There was a period of 2 years where we severed all ties with his step-mom in order to preserve our marriage after some really awful things happened. That was the hardest decision I think we've ever had to make. It seemed so drastic and yet so necessary for that time-period where we were already floundering on our own and couldn't stand even the smallest bit of weight to tip us over completely to drowning. It wasn't even that she was at fault all the time for that weight, it was that we didn't know how to deal with a lot of the things that came up with her in the way we were supposed to. We didn't know what else to do but to avoid any problems completely. There was also a time that we just came out of where his sister wasn't speaking to us over several misunderstandings.

No, this was definitely not the dream I had in my head when I envisioned what it would be like to enter into another family. There has been so much that has happened in the seven + years that we have been married that it's hard to even think about what has kept us going, kept us trying, made us succeed to come to where we are now.

You see, despite all the misunderstandings, hurt, difference of opinions and silence, there has always been something at work in each of our hearts. I can't really speak for the others but I can speak for what has been in mine. I have prayed constantly. At times when I wanted to let my flesh win over and say "F it all...", I prayed the hardest. Because I knew that even if things couldn't ever be the way I had always dreamed they'd be, I knew that how they were wasn't what God wanted them to be. As I grew up a bit, I realized that I am not called to be liked by everyone. In fact, there's a funny saying with truth at its core that goes something like "If you call yourself a Christian and you don't have at least one person mad at you, you're not being a very good Christian after all..." or something like that. But regardless of the things that have taken place because of our complete belief and reliance on God in our family life, I am still not called to be liked by everyone. It wasn't supposed to matter if my in-laws liked me or not. What mattered was if God was happy with me.

With that realization came the idea that the only thing I had control over was how I behaved and what I was called to do in any relationship with anyone God places in my life. That meant that no matter what happened, I was called to love my in-laws, serve them, and be charitable even and especially at times when it was difficult to do this. I was meant to look past the weakness of their flesh and see them as God sees them, having compassion for them in their journeys and praying for them daily. I prayed that God would bless my efforts, however meager they were at times (and really, at times, they were so meager, I wasn't even sure I was making them). I prayed that God would fill me with the love I knew He wants us all to have for each other. And I prayed that even if they never got to that point with me, that I would continue to serve Him by serving and loving them in any way I could. I had to change a lot about myself in order to do this. I had to look past my own needs and desires and concentrate on theirs. Sometimes I failed. I also prayed that He would help me with those changes about myself, make me the person He wanted me to be so that I could be the in-law they deserved.

So, in the super magnificent way that God works, He has blessed me not only by allowing me to really be able to see more clearly the weakness in my own behavior, attitude, thoughts and feelings in a certain situation so that I may really approach it with a new perspective, but He has blessed me with the love from my husband's family that I never thought I'd get. I prayed at times that they would be able to see past my weaknesses (such as the way I said things that didn't always come out right which seemed to be big a huge contributing factor to the incongruity of our relationship) and figure out a way to love me despite my failings. I wrote exactly one year ago about a new chapter we were beginning with Joe's step-mom when we finally started talking to her again, and how hopeful I was about it. I feel like in the last year or so that we've had her back in our life, there has been a major progression of our relationship. Things seem so much more at ease and there is a new understanding of the dynamics and how we are to interact.

His sister has come to a place of wanting a relationship with us again and that is a very exciting thing as well. It's so nice to be able to be on the same page with people in your life. It doesn't necessarily mean everything is always perfect or that there aren't blips that come along. And it doesn't mean everyone always has to agree on everything. But it is a chance to show mutual respect and love toward one another; making the willful act of kindness and courtesy to say, "I want to try." And to me, that is enough.
Posted by Rebecca at 12:15 PM