N is for Nonsense 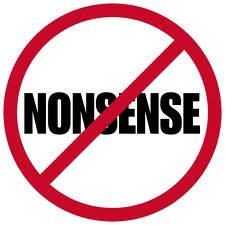 I did just turn 30 recently right?  I just wanted to check.  Because sometimes, it feels like I am not a grown woman in my 30's with 5 children, a husband, a business and a very very full plate otherwise.  There is a myriad of ways it often feels like this but lately, it's because there has been a stream of drama flowing through my life that I don't think any woman my age should have any part in.  Not that I asked for it.  But I got it nonetheless.

It is a bunch of nonsense.  And in the middle of all of it, I realized there are some people in my life I can't really trust that much.  I also realized that I am yet again being called to be in difficult situations with people just so that I can show them Christ's love.

Something about the tendencies of my flesh that makes it really difficult to do this is that I want EVERYTHING laid out in the freakin' open ALL the time.  I don't like secrets. I don't like pretending. I don't even like knowing something about someone else that I shouldn't and then not telling them I know.  I don't like holding back something important just because someone else hasn't asked.  Isn't that the same as lying? I don't like it when people do these things to me either.  I don't like being fake.  I don't like smiling when I just feel like crying.  And yet, sometimes some of these things are so very necessary. Most of the time, depending on the situation they aren't. Not all of them.  And going back to my wanting everything to just be laid out on the table..  I am not a fight-picker.  I don't want this stuff spread out in all its gory truth just so we can fight about it. I want it that way because then we can both/all see what we're dealing with.  Then we can start to understand where the other person is.  Then we can start to pick up pieces, examine them in a positive light, absorb their weight and feeling and every last gritty detail so that we can begin anew in a place of resolve, honesty, love and understanding.

My husband and I do this. Ok, not always; sometimes we fight unfairly.  Sometimes things just get pent up because of fear of fighting, but then come crashing out in a thunderous cascade of anger later. But for the most part, we like to lay things out on the table and figure it out from there. If there is an issue that comes up with a friend, it is usually laid out on the table as well.  There's no sweeping under the rug, there's no dancing around in a secret silent motion, no ignorance of the elephant in the room.  Isn't that how grown-ups are supposed to act?

Sometimes I feel like I just want to be a hermit.  Live my life in my little home and not worry about what goes on outside these four walls.  Then there would be no nonsense.  Not anything I *shouldn't* be dealing with as a wife and mother.  There would be no drama.  There wouldn't be a constant worry of who to trust, who is telling the truth, who really cares. There wouldn't be any need to smile when I feel like crying.   Sometimes, I am just tired of all the nonsense.
Posted by Rebecca at 12:36 PM