P is for Prudence

I thought a lot about what I wanted to write for "P."  I have had a hard time thinking clearly or deeply lately so I was trying to avoid mumbling and rambling about something unimportant, or totally missing the mark on something of grave importance.  I pray that my thoughts on Prudence have some effect on you, my readers, and that through that, you find yourself drawing ever close to the Lord.

Prudence is defined as the ability to discipline and govern oneself by the use of reason.  It is, in essence, considered the Father of all virtues, as it takes Prudence as a foundation to be virtuous in other ways.  Prudence is not about emotions, but knowledge, and rests at the core of who I am as a Catholic and who we are all called to be as Christians in general.  It's an aspect of the connection we keep with God, directing our choices based on goodness and morality.

This past Sunday at Mass, one of our resident priests, Father Tri, was at the pulpit as he usually is for our 11 AM service.  Father Tri is often hard to understand but it's really interesting because when the message seems to be geared directly toward me or my husband, it's like we can understand him perfectly.  This past Sunday was such a time.  His homily wasn't necessarily about Prudence, but about our connection to God and to each other as Brothers and Sisters in Christ.  Father's homily included two very relevant jokes that were both humorous and thought-provoking, and happened to be about people who run a business.  As both my husband and I sat a little straighter in the pew, it dawned on us both that buried in the humor of his jokes was a little nugget of wisdom we needed to be searching for as we listened ever-intently. 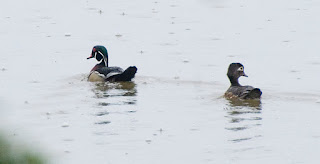 Since the landscape season began this year, one thing has happened after another to sort of knock our spirits and bring us to the brink of despair.  There have been many frustrations causing us to question where God is taking us and what, if anything, we are doing wrong.  It's been a huge lesson in humility and patience as we've sort of had to become sitting ducks, waiting on the Lord to provide answers.  But as many of us know, answers don't always come immediately, and not always in tangible forms which are easily recognized and understood.  So....as we have been facing on-again, off-again challenges in our business since March, we are still sitting ducks, fluffing and preening our feathers as the rains of each storm pour down.  (At times, that last statement is quite literal as constant storms and rain delaying projects has been one of the many challenges we have faced!)

The main message of Father Tri's homily, like I said, was about our connection to God.  But as I had been turning over in my head the possibility of writing about Prudence over the previous week, I realized that Prudence plays a huge role in that connection.  We must own the ability to discern life situations wisely.  How do we do this?  Well, in regards to our business, it is seeking His guidance in each and every aspect of our business, especially when challenges arise.  We have an idea of the direction our business is to be taken yet the road to get there is dark and bumpy.  We don't always remember that He is in control.  Sometimes, the decisions we make seem to be the wrong ones.  Even if we have prayed and felt strongly that it's what we are meant to do.

So, there's that word, felt.  Prudence isn't about feeling, it's about knowledge.  For us, it's knowing what God wants from us and making decisions based on that knowledge.  Our knowledge that He wants us to follow and trust in Him has been our beacon of light.  But sometimes that light gets buried in the practicality of running a business, and not knowing which is the best path to take.  Sometimes, what the world says is the best way is NOT the best way.   In the face of practicality (without morality as its vehicle), it's difficult to choose differently.  The world is often telling us that if we want something, we just go after it, we should have what we want.  Making wise business decisions is the way to do it.  But our wise business decisions shouldn't be made for the sole purpose of having what we want.  God has made it very clear to us that what He wants is what is more important.  Wise business decisions in truth should be grounded in Him.  While being prudent does involve practicality, practicality does not have the last say.

Last year my husband was in a situation where he was having a conversation with some people who have been integral members of a very very successful business.  He was discussing our business and how much it has grown in the few years we've been running it, and how, even in the face of a floundering economy, our business has flourished.  When asked what he'd attribute that to, what good business practices could he equate with our success, he looked them in the eyes and said "it was all the Lord.  We couldn't have done it without Him, He is running the show.."  These people looked dumb-founded as he explained our complete and total reliance on God to sustain us through income-less winters, to find us potential clients, and to show us what efforts to make to build our business up.  In reality, he probably seemed much like Noah when he was explaining the coming flood to his fellow towns-people, just like we both did when we first decided to start our business in the midst of a down economy four seasons ago.

Prudence isn't just a virtue, it is a gift.  It relies on many parts to be practiced correctly and the main part is that connection with God.  If we don't connect ourselves to Him, through prayer, petition, thanksgiving, praise, the Mass, the Eucharist, Confession, it is hard to receive the fullness of God's truth and His direction in such matters as business life.  I have noticed that when we sort of step away from Him for a bit, things seem more intensely chaotic.  I don't want to say that bad things happen.  (And I don't want to say "good" things happen even when we are connected.)  But there is something missing when we aren't.  It's tangible.  It's real.  It's solid proof that to be a Christian business owner, we have to put our business in His hands. I can't tell you how many times we've been reminded of this since day one. And really, just like in all aspects of life, it's one of the fundamental truths - connect ourselves to Him, place everything in His hands and let Him guide and He will make straight our paths.

The world has been described as a "dog-eat-dog" world and to get ahead, you have to do whatever it takes.  Success is measured in dollar amounts, position, and the means used to get to the top.  Sometimes, in this pursuit, cunning and prudence are often thought of as the same thing; but this is not actually true.  Not for Christians.  While cunning can often use immoral means, prudence does not; prudence always takes into account the greater good.  It is very easy to overlook that fact when we are trying desperately to stay afloat.

As I ponder these things relating to the running of our business, I think about life in general, especially life as a mother, and it's hard not to think of measuring my success.  Some would say that the fact that we live on one income and have so many children is not deemed successful at all.  After all, where is our big fancy house?  Where are our many cars?  Where is our six-digit account balance?  How many times have we been told, often by total strangers, that it would be better for us to put the kids in school/day care so I can get a job so we can have all the things we want?

It is definitely an often-difficult lifestyle.  We have 5 children.  We homeschool.  We own a business and it is our sole income; whether we have a good year or a bad year, it's what we have.  But our connection to God, our reliance upon Him, our ability to practice Prudence in many situations, is what makes it doable.  Yes, I am taking the road less-traveled.  But it's not so I can say "look at me!"  It's not to be a martyr.  It's because it's what God asks me to do.  I could use cunning and make decisions that seem wise that would include putting my children in school and going back to work.  But where is the greater good in that?  The greater good in God's eyes does not equal financial security, or having the means to do and have whatever I want.  The greater good equals a stable family environment which we cultivate by my being home; by running our own business where my husband can be around if we want/need him; by spending time with my children and raising them to have hearts to serve.

In the beginning of my post I described the meaning of Prudence.  In our family, Prudence has played an integral role in both our home life and our business life.  We try to pray continuously, keeping that connection with God, in order to discern thoughtfully, morally and with reason the steps we are to take to make each aspect of our lives successful.  Things might not always seem successful, or easy for that matter, but when the greater good is our goal, when serving the Lord is our top priority, and when we are using moral reasoning, it really doesn't matter how it seems to us or the world.  What matters is what God sees, if He is pleased with our efforts.

So maybe I did ramble and mumble a little bit here...  But it is about something important.  Since thinking about Prudence over the last few weeks and what it means, I have been consciously aware of the fact that we need to be prudent in every situation, especially lately, whether it be about business or family life.  I believe it is a gift; something God buried in our minds to find and use to connect ourselves with Him, just one more tool in our arsenal for this path through life.