The Beauty of MARRIAGE 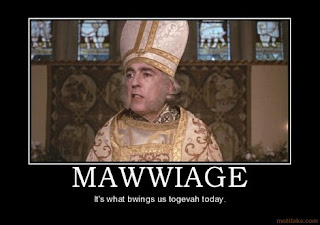 I've written before a couple posts about my hubby and me, tidbits of our marriage, and you can find a few here and a recent one here.

The following are a few of the beautiful things I have found out about marriage in my eight + years of being married to Joe:

*It doesn't matter what kind of example was set for us, we don't have to follow suit, especially if the experience and examples we have to go by are wrong.  Hubby came from a broken background.  His parents divorced when he was very young, his dad remarried twice after that.  He had no clue what a happy, functional, real relationship looked like.  I can remember the first two + years of our life being overshadowed by this gloom of anticipation as to whether or not it really would work. His usual first response, even over something trivial, was 'maybe we shouldn't be together.'  I also did not have the best example as to how married couples should treat each other, though my parents are still married and by the grace of God I was aware that they loved each other and me.  After some time of really focusing our attention on the baggage we each brought to our own marriage, Joe and I realized that we had to break the cycles we each experienced and work diligently to take out anything that would tear our marriage down.  Truly putting God in the center was the #1 thing we had to do, and then we went from there.  It was only in the last three-four years that we have really seen major changes.  Things aren't always perfect, and it's often tempting to start looking for that back door, but we both can trust that there really isn't one.

*Our relationship comes first, above anything else except God.  It's so easy to succumb to the duties and craziness of having a large family, and allow that to interfere with the closeness of our relationship.  This is especially difficult for me, as the main caretaker and organizer of our home life.  We have had to work very hard to make our children understand that Mommy and Daddy's relationship needs to be respected, and that we need time to talk and spend with each other, without a million interruptions.  Not only that but that we are united and that the effects of their negative behavior are not allowed to come between us. This idea also extends out to our other family members.  We have had to really draw closer to each other, making very difficult decisions, and not always doing things we would like to do with or for them because it would put a strain on us and our marriage in various ways.

*People do change and Love really does bear all things.  My husband and I have both changed in SO MANY needed ways.  I would have to think really hard about the changes God has made in me, and probably wouldn't be able to truly articulate them, because I don't really see them in a tangible form I can describe.  I often feel like I fail miserably constantly and that I'm still a scared 22 year old trying to figure out my life.   But hubby says I have so you'd have to ask him and our family about my changes.  I wrote a post about my husband last year for his birthday and the changes he's undergone in the time I've known him. I'm in total awe of how GOD has changed him.  Joe has worked hard and God has blessed his efforts, creating the changes

which he needed in becoming the man that God wanted him to be.  We both have a long way to go, still, but we recognize our small victories, and thank God for  getting us this far.  We realize the truth stated in the verses in 1 Corinthians, that Love bears all things!  Joe and I have been through SO MUCH - anger, depression, abuse, alcoholism, broken trust, broken extended relationships, loss of income, loss of babies, loss of friends, change of state, change of church, the births of our babies, new business, new home...And our Love, fused together with God's Love, has seen us through it all.

*Babies are a blessing to marriage. As much as people have told us that babies are burdens and we should stop having them, the Truth says otherwise.  As Christians, we are called to be open to life. As difficult as it is, as much of a sacrifice welcoming new life can often be, it is our calling.  Closing ourselves off to these gifts from God for the rest of our marriage would only start us down a very dark path.  The only reasons we would have for being closed to new life are selfish ones.  The children God has blessed us with have changed our lives for the better and I can't imagine the self-absorbed people we would have turned out to be if we had decided after our first two that we were "done."

*Marriage is a sacrament.  It has the power to bond two people together from the moment they express their vows on their wedding day, literally until death do them part. It is one of God's blessings for a man and a woman, and should not be entered into lightly.  There are so many things I wish I knew about God's purpose and design for marriage before we ever got married, but I'm glad God is showing them to me along the way.  If we don't treat it as the sacred union that it is, partaking in the grace-filled blessings such a sacrament bestows, we are doomed to failure.  It is up to us if our marriage lasts.
Posted by Rebecca at 8:00 AM

Hello, my friend..
Thank you for a beautiful and thoughtful post. My first marriage didn't survive, but produced two lovely daughters, and my second one lasted for 45 years. He passed away nearly three years ago, and I miss him every day. We were happy and I have so many fond memories of our years together. Bless you, my dear and best wishes. Best regards to you, Ruby