I'm Not Better Than You 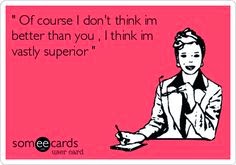 My husband and I were having a conversation last night about people.  It began with a discussion about a neighbor making a comment on something on Facebook in which I tagged my husband, a comment that was totally inappropriate to make in the context of what I posted, especially because it didn't even have anything to do with what I was posting about, and one which made me feel like he secretly has some issue with me.  Which would be funny because he doesn't know me at at all... but I digress.

Our conversation then turned to my drawing inward and coming back out with "am I a really terrible person and I am just in complete denial about it?"  Because we know someone a little like this.  His reply, "no, people just think you're opinionated, like you're better than them and they take it the wrong way."  "What am I opinionated about?" I asked in complete innocence.  "Not really opinionated, but just that we homeschool and go to church and all that... and you're vocal about it...people think you think you're better than they are."

Since when did MY decisions about MY family equate to "I'm better than you." ?

I am the type of person that wants to be told when there's an aspect of myself that can be improved.  Even if it hurts.  Even if at first, I don't like it!  I want to be a better person in general.  So I welcome the truth.  But I don't want YOUR truth. I don't want you to tell me something about myself based on your whacked out version of observance because you don't know anything about me at all and haven't taken the time to get to know me.  I'm a whole human being.  Your experience of but one or two or even three aspects of the millions of parts of my identity will not tell you enough about me to warrant such a harsh and generalized judgment.

There is something about this song that seems familiar.  Oh yes, it's the soundtrack of the last ten years of my life as a Mack, which I spent warding off my husband's family who accused me of all these things, including that I thought I was better than them, that my family was better than theirs.  Accusations based on the fact that they don't even know me at all, that they make assumptions about me based on one or two aspects of my life that they have witnessed, or based on their witness of someone else's behavior which they project onto me.

I'm changing the station.  I'm done with all that.

I follow a set of moral standards that most of the world does not.  I do this because I'm called to, as a Catholic Christian.  It's hard.  If I really wanted to do what my flesh wants, my life would look completely different.  But I was asked to do and be what I am striving toward, and though I fail CONSTANTLY at it, I'm TRYING.  This doesn't make me better than anyone. It just means my convictions are different than some people's. 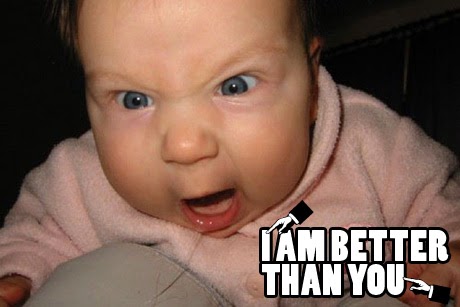 I homeschool my children in a world where there is still a huge- unwarranted - stigma related to homeschooling, and where most people are still largely unaware of the consistent (but not exclusive) failure of the school system to actually produce healthy members of society.  I homeschool because the public school system presents a constant resistance to- and often override of- the morals I want to teach my children, and the atmosphere of a brick-and-mortar school setting is not conducive to allowing a child to really explore all that they are interested in or all of their capabilities.  These two ideas barely scratch the surface of all the reasons I homeschool, but neither these two nor the rest of my reasons are because I think I'm better than anyone.   You want to send your child to public school, that's great.  Good for you!  I have no opinion about your choice at all.  It's not my business.  Just like where my kids go to school isn't your business.

I have a large family.  Yes.  I do.  It's not because I really absolutely adore children.  It's not because I am getting some government benefit from having lots of children.  I'm not.  It's not because I think I'm better than anyone who has less.  I have a big family because God asked me to be open to life.  And while that doesn't always equate to having a big family (I know many many people who are open to life AND want a big family, but have been able to have only one or two kids), for me, it does.  And while this is a HUGE challenge for me on a consistent basis, I'm ok with it.  I'm ok with any number of little souls which God entrusts to me to create saints for heaven's glory.  I fail at my duty.  A lot.  I sometimes wonder why He trusts me so much.  I scream at my kids sometimes.  I get upset.  I cuss sometimes.  I don't say nice things to my kids every moment of the day.  I'm a sinner.  I'm not perfect.  I could name many many women I know who could be doing a much, MUCH better job than I am.  But for some reason, I was the one chosen for the monumental feat of baring and raising these children and I'm told by women much wiser than me that God did not make any mistakes; I am the one for the task.  This doesn't make me better than anyone.  Not one bit.

I really wanted to be snarky and cynical about this whole thing.  I guess I am a little sensitive.  But really, I'm just sad. I'm sad that people don't take the time to actually get to know a person before making assumptions about them.  I mean, my in-laws spent TEN years wasting their energy on tearing me down and rejecting me instead of spending that time getting to know me.  My neighbor has never spent more than three seconds in conversation with me and yet has some idea of me that isn't true.  People are quick to make a judgement on someone else's character or personality or whathaveyou, instead of actually taking the time to get to know them, to love them.

So you don't have time to get to know me?  Who's the one acting better than who now?
Posted by Rebecca at 9:49 AM

Labels: better than you, kindess, love